The Black Cow: Better Than Baking Soda in the Fridge 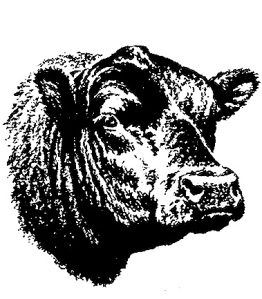 Every so often a truly great marketing coup comes along that stands out from all the rest. When Arm & Hammer told us to put boxes of baking soda in the refrigerator, nearly every fridge in America got one as a gift. The onions no longer fought with the fish and the leftover pizza. And just in case you missed that part of the campaign, part two reminded you it was time to change the box of baking soda. So if you didn’t have one there already, you ran out and bought one. Yet another great scam perpetrated on “Boobus Americanus” (see H.L. Mencken). It doesn’t really matter whether or not the baking soda works (it probably does); what matters is how effectively they marketed it to solve a problem that most people didn’t have. If your refrigerator stank, the usual solution was to throw out the spoiled food that caused the odor. Or just accept the fact that you’re gross.

But the ad agency that did Arm & Hammer had nothing on whomever the American Angus Association brought in to convince Boobus that black cows taste better than brown ones, white ones, brown and white ones, and all the other possible colors of cow. And we bought it big time. Hundreds of restaurants now have the word “Angus” in their names. McDonalds and Arby’s proudly offer “Angus” beef products at a premium price. Supermarkets let you know which ground beef and steaks on their shelves came from a black cow.

After all, what do we really know about Angus cattle other than their black color? Have you ever read of a national taste test comparing prime aged and well prepared steaks from different colors of cow? No, neither have I.

This could be the greatest marketing coup, dollar for dollar, yet.

I can just picture it. It’s about 7 pm at the ad agency office. The 20-somethings are sitting around thinking about who their next client should be. Then somebody says, “cows.” I bet we can convince people that the color of a cow affects its taste. Do you want to do white cows, brown ones, or black? OK, let’s go with black cows. Somebody go check to see if there’s a black cow ranchers’ association or something like that. There is? Great. We’ll call them in the morning and see if they agree that the genus Boobus Americanus is just as stupid or even stupider than the Arm & Hammer guys thought.

Or maybe the black cow ranchers got the idea first. Either way, it’s pure evil genius.